What are the Cray Research connections with Apple Computers ?

Cray Research and Apple Computers, seemly at opposite ends of the computer price spectrum, do have some subtle historical links. It is well known that Seymour Cray used an Apple desktop when designing Cray Computer Corp machines.  Macintosh computers where the desktop of choice and used almost exclusively whilst the company worked on the Cray-3 and Cray-4 projects. Much of the work was moving text and graphic files around a shared network.  “Seymour said he thought it was odd that Apple bought a Cray to design Macs because he was using Macs to design Crays. He sent me his designs for the Cray 3 in MacDraw on a floppy.” reports KentK.

Apple Computer had a sequence of Cray machines starting in 1986 with an XMP/48 shown above followed by another XMP in Feb 1991. An upgrade to a Cray YMP-2E arrived later in 1991 and finally one of the smaller air-cooled Cray Y-MP EL from Dec ’93 to Jun ’98.

Legend has that Apple’s first XMP was bought by Steve Jobs after he walked into the Cray facility in Mendota Heights. However “Mike” a more reliable source relates ….

“The first machine installed at Apple was an X-MP/48 completed in August 1986. It had painted purple metallic columns and black power supplies. John Scully was the CEO, and he called the Western Region office in Pleasanton, Ca to get the salesman for his area of Cupertino, and his call was directed to Mike Wilhelm, the Western Region Manager, who after a lengthy conversation dispatched the salesman Bence Gerber, who sold the machine. I was standing at the receptionist desk who took John Scully’s call when it came in, and got excited that Apple called us, and then went to Mike Wilhelm’s secretary to hear what happened. I was also present for the installation, and spent many days covering the site.”

According to a quote from MacObserver Website the timeline would indicate that John Scully was indeed in charge by install time.

“1985: Apple’s board of directors authorizes John Sculley to remove Steve Jobs as executive VP and general manager of the faltering Macintosh division. Sculley, who genuinely liked Jobs, didn’t act right away, hoping to make a smooth transition. Only after discovering Jobs’ plan for a coup the following month did Sculley finally strip the founder of all operational responsibilities.”

The Apple Cray machines were originally purchased to help out on a computer on a chip project and other engineering projects. Such projects included using the first Cray XMP as a Macintosh emulator for user interface design improvements. The site analyst reports ..

“.. they sometimes ran the first XMP as a single user MacOS emulator … They had a custom built frame buffer and a mouse hooked up to the IOP (Input/Output Processor).”

Other applications were Computational Fluid Dynamics codes for disk drive head design improvement and complex chip and board logic proving tests. The Apple Cray machines eventually earned their keep running MOLDFLOW an injection plastic modelling program ( producing some results in the form of Quicktime movies) and later as a file server.

T3d cube of cubes logo animated by changing the size of the surrounding balls.

What is less well known however is that the small active display panel on the front of the Cray T3D machines was an Apple powerbook. The powerbook ran a Macromedia presentation showing the T3D cube of cubes logo with an orbiting growing/shrinking sphere. The display at one site was changed to alternate with a presentation plaque display. It was rumoured that one site engineer ordered a collection of spare bits that, over time, comprised a complete new powerbook.

The Sept 1999 launch on the www.Apple.com web site of the G4 Macintosh computers displayed a YMP-8D computer on the processor details page. Whilst there was no direct reference to that particular machine there was a re-quote of the Seymour quote about “using an Apple to simulate the Cray-3” in a sidebar. The G4 was being touted as a “Supercomputer for the desktop” and with the performance figures of a Gigaflop/s (1 CPU) which is certainly up to at least 1992 supercomputer cpu speeds. The YMP pictured on the site would have had 0.333 Gflop/s per cpu but was sold as sustaining 1 Gflop/s, for the whole machine, on real life applications. Only comparable benchmarks would show if the Apple G4 could match the memory size, memory bandwidth and IO capacity the 8 year old Cray shown. There is however no doubt that the G4 would be cheaper to purchase than any machine from the Cray range.

The once popular Macintosh telnet communications program developed by NCSA (National Centre for Supercomputing Applications at the university of Illinois) in has an icon which is an Cray XMP surrounded by a network with Macs. NCSA had a Cray accessed by Macs and thus needed to develop such a program.

One of those strange coincidences between Apple and Cray were problems using Perspex as a chassis material. Apple had problems with the Power PC G4 Cube machine as the corners were subject to cracking in some instances. Over at Cray the innovative total immersion cooling Cray 2 had cylindrical coolant reservoirs and cascades. After some time the coolant reservoirs tower material started to “craze” and fine cracks appeared. This was remediated by a new designed a new rectangular cascade that had a smaller footprint, was made of glass that solved the problem.

See other Cray historical notes at The Cray FAQ over at 0x07bell.net.

Another crossover area was seen then in 2003 when Virginia Tech, a leading USA technology university, built a super computing cluster out of Apple G5 systems united using Mellanox Infiniband networking.  Video on YouTube here. Rated at 29 Tflops the system reach #3 in the top 500 in Nov 2003 for a while. Later replaced by X-Servers was this a case of the student overtaking the master ?

Further details in this article from Cray Channels 1987 (c)Cray Research Written by Kent Koeninger at or about the time of Apple’s first Cray purchase. 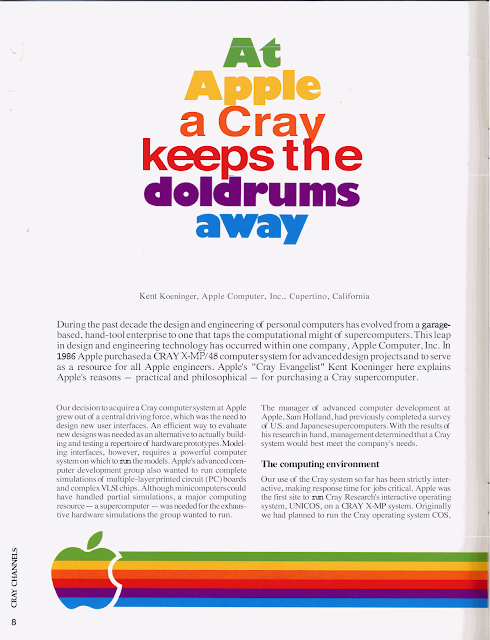 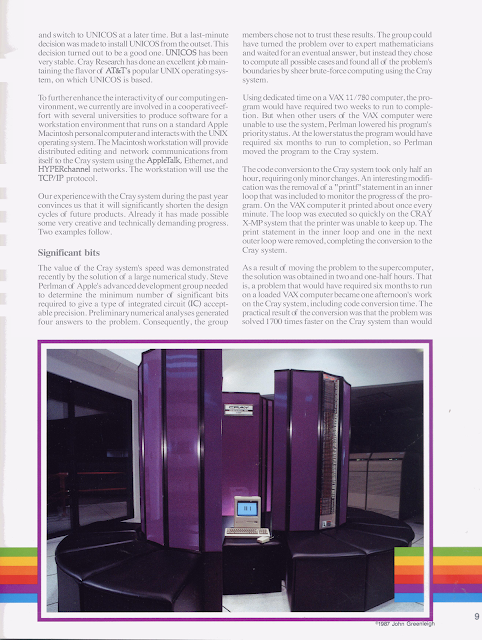 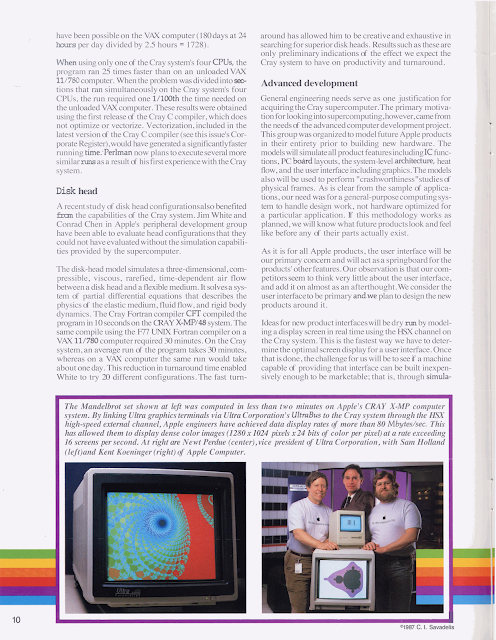 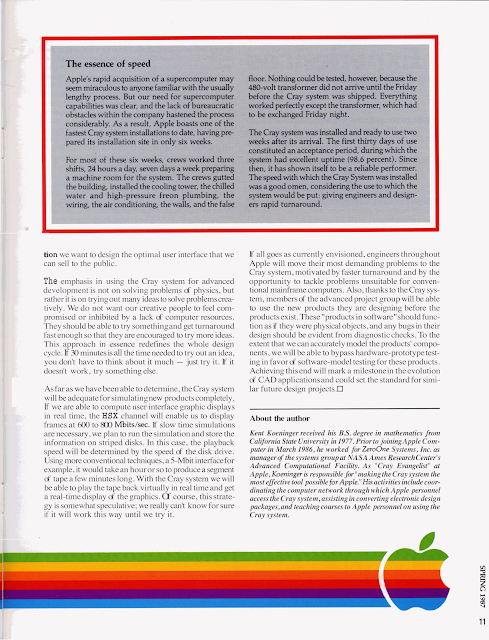